Skip to content
2010-11 represented the first year of Coalition Government and many challenges for ACERT.

ACERT sought to respond to these challenges providing information to parliamentarians, stakeholders groups and  government consultations. In meetings with ministers, OFSTED and the Children’s Commissioner, we sought to ensure that Gypsy, Roma and Traveller pupils remained on the inclusion agenda. We also worked with other organisations, such as the NATT+, ITMB and RSG, to develop effective and coordinated responses to developing policies.

You can view the day’s agenda here

Pat Barr reported on the year for ACERT

Eric Avebury delivered his update speech at the AGM. You can read his speech in full by following the link below.

Michael Doherty reported on his research into the extent of cuts in Traveller Education.

Angela Overington spoke on behalf of the Department of Education.

Laura Grearson and Gabriella Smolinska-Poffley spoke about their organisation. The presentation file can be downloaded below. Note that this is a large file – over 18Mb in size.

A DVD featuring “Education on the Hoof” was shown at the 2010 AGM – Appleby Horse Fair 2010. We have been granted permission to show the clip on our site. This film was filmed, edited and produced by Toby Park and Tom Newlove and features footage by Simon Evans.

This year’s AGM took place in late September, again in The Community Rooms in Millman Street, London. A well attended meeting heard Lord Avebury give the keynote speech. David Sheard of Cumbria County Council speaking about this year’s Appleby on the Hoof and a viewing of the DVD “Road to Success” were other highlights.

Eric Avebury delivered his speech at the AGM. You can read his thoughts in full by following the link below. He gave a view on the shortage of sites in the UK and reported on the Government’s first annual progress report on Gypsy and Traveller policy. With a possible change of Government in 2010 Eric gave a view on the possible impact on GRT communities and Traveller Education Services. Finally, he looks forward to the decision to establish a DCSF Traveller Forum.

The DVD “Education on the Hoof” made at this year’s Appleby Fair was shown at the AGM. We have been granted permission to show the clip on our site. This film was made by Simon Evans.

Education on the Hoof

The PowerPoint Presentation of Education on the Hoof can be downloaded and viewed offline below. 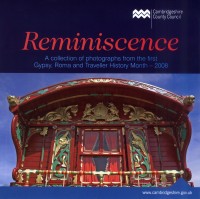 Kate D’Arcy gave everyone present at the AGM copies of the new publication “Reminiscence” produced by CREDs.

Arthur Ivatts writes in the book’s introduction: “This wonderful book of photographs provides a telling story of the many and varied events that took place up and down the country during the month of June in 2008. I am sure the editor, Rose Wilson and her colleagues had an extremely difficult task in the sorting and selection process. We must all be indebted to all of them for this memorable historic archive which will be treasured by so many for so long.”

Further copies of Reminiscence are available for just £1.50.