Robin Marriot, the son of George and Mary Marriot, contacted ACERT to share the story of how John and Yoko Lennon supported a caravan school on a roadside camp in Bedfordshire.

I came across your report concerning the above schools. My Dad, George Marriott, a disabled WW2 veteran, and my Mum, Mary, herself disabled, although not Gypsies themselves, were heavily involved in Gypsy Welfare in Bedfordshire from the mid 1960s until the 1980s, due to the inhumane way in which Gypsy people were being treated throughout the county.

As you know, at that time, with no permanent sites for Gypsy families, it was impossible for their children to receive even a basic education and my Dad had the idea to take education to the children via roadside caravan schools.
But how to fund them? I was 19 years old at the time and a Beatles fan. I was aware that John & Yoko Lennon were involved in a number of projects outside of making music so I suggested that my Dad should write to them and ask for financial help to start up the caravan school project.

Some time later, out of the blue, on 1 December 1969, a telegram was delivered saying, “We are behind your project. Will send money immediately. Love John & Yoko.”

A cheque for £100 duly arrived and my Dad negotiated the purchase of a second hand 32 foot long caravan that would be sited on the roadside close to the M1 bridge on the Caddington to Luton Road. Local press covered the story which was picked up by the nationals.

Much to my Dad’s embarrassment The Daily Mirror incorrectly reported that the Lennons had donated £1,000 so he immediately contacted them (John & Yoko) to alert the to the incorrect report.

A few days later a letter arrived from John & Yoko with a cheque for £300 and a “PS” saying, “Use it well, but don’t tell!”. With the additional funding a second caravan was bought that Mr Gerwyn Davies, a supporter of the cause over many years, allowed to be sited at his school in Kensworth.

Unfortunately the Caddington school was burnt and destroyed by so called “vigilantes” or brainless idiots as my Dad referred to them.
I remember well Gratton Puxon and Tom Acton and their involvement, as well as Jeremy Sandford the author of Cathy Come Home and Yehudi Menuhin the violinist.

I was  pleased to hear that Gerwyn and Mrs Davies are still with us. My Dad was a great admirer of him and the way he embraced “The Cause” in spite of the unpopularity of the project among local residents.

As a footnote, when my Dad died in 1996 the Luton News and Dunstable Gazette (they referring to him as the “Gypsy Champion”) reported the event. To our surprise a number of Gypsies attended the funeral, some of them were by this time adults who had attended the schools and been taught to read and write !

The National Executive of Britains largest education union has adopted a resolution opposing racism and hostility towards Gypsy, Roma and Traveller communities and seeking ways education can be used to challenge and reverse it.

a. Gypsy, Roma and Traveller Communities

The Executive notes that Gypsy, Roma and Traveller (GRT) communities continue to face an ever increasing climate of racism and hostility.

We note The Police and Crime Bill, in criminalising the nomadic way of life, is adding to the social exclusion and racism faced by the GRT community.

We stand in solidarity with GRT communities and oppose all anti-GRT racism.

We recognise that there is still much more to do in the fight against anti-GRT racism in Education. A recent study by The Traveller Movement found that one in five Traveller pupils felt they had to leave school due to bullying and two thirds of those surveyed felt bullied by their teachers. GRT children are excluded from school disproportionately compared to other ethnic groups. In addition to this, Gypsies and Travellers are 10 times less likely to go to university than their peers and fair worst in terms of educational attainment.

As with all discrimination, education is at the heart of challenging it. The NEU has a long history of standing in solidarity with the oppressed and using our skill as educators to challenge racism in all its forms.

We call on the executive to:

1. Work with the GRT community and organisations to produce educational resources to be shared with members, so they can be used in schools and colleges to raise awareness and challenge discrimination.

2. To continue to oppose the Police and Crime Bill and actively support Gypsy, Roma and Traveller led demonstrations against the Bill such as “Drive to Survive”.

3. To work to influence government, opposition parties and local education, to provide funding, issue guidance and offer training to enable schools to develop policies and practices to address the continuing educational disadvantage of these children.

4. To keep pupils from Gypsy, Roma and Traveller communities high on the Union agenda particularly in all publications relating to inclusion and equality, racism and bullying.

5. To actively seek ways to increase the recruitment of school staff from Gypsy, Roma and Traveller ethnic groups and provide appropriate support to encourage their retention in the workforce

6. To make a commitment to providing training to build the confidence and ability of teachers to support these pupils.

7. To review NEU publications/guidance etc, to make sure that in relevant placesnthese groups are explicitly included.

8. For the NEU to affiliate nationally to the Advisory Council for the Education of Romany and other Travellers (ACERT) and Friends, Families and Travellers.

This role is an opportunity to be part of a pilot project to work with Gypsy Roma and Traveller children and their families, where there are issues relating to engagement in education. We are looking for the right candidate to build relationships and support children and families to raise aspirations for learning. Working collaboratively with partner agencies and across teams in Central Bedfordshire Council, this is a fantastic opportunity to find your greatness.

Here is the video stream of our 2021 Conference Looking Forward, Breaking New Ground at the Friends Meeting House, Manchester.

The links below will take you to specific presentations 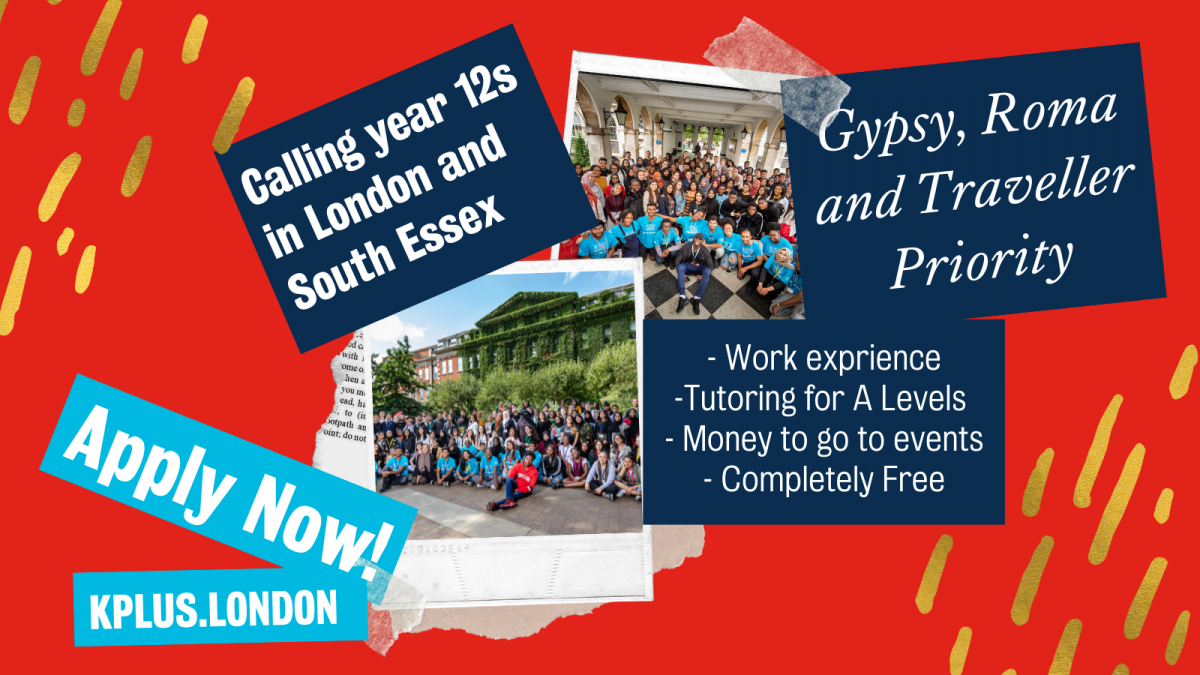 Once again, King’s College London are prioritising Gypsy, Roma and Traveller students on their flagship K+ scheme for year 12 students in London and South Essex. This has been so successful in the last few years, and each year we see more Gypsies, Roma and Travellers head to university from K+.

As well as all of the amazing experiences and application support students get through K+, Gypsy, Roma and Traveller students will also receive extra support, provided by the global leading law firm Linklaters. This includes:

Applications are open from now until 29 October – to apply visit https://kplus.london

Most of the people who attend the Traveller Education network meetings work in Traveller Education support services or similar. There are members from all over the country of whom around half tend to join the discussion each time. Often one of the participants talks about some aspect of their work to kick off a discussion with the group. People who may feel isolated in their work can take the opportunity to discuss dilemmas or seek advice.

ACERT hosts the meetings via Zoom. They run between 2p.m. and 4p.m. on Wednesday afternoons. The first meeting of this school year will be on Wednesday 13 October at 2p.m.

The remaining dates for the coming year are provisionally set for:

This one day conference will target education professionals and Gypsy, Roma and Traveller parents. Richard O’Neill will chair a lively day of presentations and discussions on school and community initiatives that widen opportunities and raise expectations.

After a difficult eighteen months our aim is that the tone of the day will be optimistic. Through sharing ideas and experiences we aim to inspire practical ways forward in the current context.

We want all participants to find this an accessible event. This event is costing ACERT £40 per person. We have set a Standard Ticket price for all who can afford it but if this is beyond you, please make the best donation you can. A buffet lunch and refreshments are provided throughout the day.

We are keen to include parents interested in being part of a parent support network and to identify ways in which ACERT can back them in getting a better deal for their children.

Presentations/Workshops so far agreed include:

A history of the 1971 London World Romani Congress

Written and narrated by Grattan Puxon, Romani activist and general-secretary of the 1971 Congress.

Produced and edited by Ioana Constantinescu for the 8 April 2021 Jubilee celebrations organised by the Jubilee London Committee.

Using archive footage and photographs, Grattan takes us through the 60’s in Ireland where he became involved in Traveller issues, to the UK early campaigns against evictions, the setting up of the Gypsy Council and the lead up to the 1971 Congress in London.

Register for Our Romano Drom HERE

This virtual 2-part event, hosted by Mena Mongan, will be an opportunity to come together to celebrate the rich culture and heritage of Gypsy, Roma and Traveller communities through discussion, music and stories.

The event will begin with a short panel discussion on the impact of the proposed Policing and Crime Bill on the culture and lives of Gypsies and Travellers in the UK.

This will be followed by an exciting mix of musical performances and presentations, including..

Register for the celebration HERE

On 8th April 2021, the World Romani Congress marked 50 years since the 1971 founding event in London. It was a crucial point in the history of Romani people and is now seen as the beginning of the worldwide Romani emancipation movement. It started a political fight for equality,mobilised through Romani organisations, and the unifying flag and anthem.

This year to mark the jubilee anniversary a series of diverse online events have been taking place that offer the opportunity to celebrate Roma history and culture but also critically reflect on the ongoing challenges that are still faced by Romani people worldwide.

Events can be enjoyed via a live stream at www.romanistan.com a virtual place that crosses all continental borders and connects Romani people worldwide. The president of the First World Roma Congress in 1971, Slobodan Berberski, once said: “Every place, there is Roma, there is Romanistan.” This utopia has now become reality!

It is hoped that this year’s online events will spark greater mobilisation. Grattan Puxon, one of the co-organisers of the First World Romani Congress, said: “At a time of rising far-right extremism and anti-gypsyism it is hoped that this anniversary year will bring Romani people and our allies around the world closer together, to create a common purpose, celebrate achievements, and build a stronger collective voice.”

If you weren’t able to attend or wish to reflect on International Roma Day, recordings of the day’s events can be found on Romanistan’s YouTube and Facebook pages.

There is still time to take part and the congress events are open to all. Check Romanistan’s website for updates and information on the next sessions.
In addition to the congress events, Romanistan and its partner oranisations have delivered an online World Roma Congress art exhibition.

One of the many positive outcomes of the World Romani Congress Jubilee celebrations is this set of animations, which will be a valuable resource for Gypsy, Roma and Traveller History Month and Holocaust Studies more generally.

They introduce the anthem Gelem, Gelem, the flag and the World Romani Congress itself.

They all live on the developing ACERT YouTube channel.