Data provided by the DFE, in response to a request from ACERT, suggests that the gap between Gypsies and other pupils at GCSE is beginning to close, but that Irish Traveller achievement at 16 is flat-lining. Both these figures must also be read in the context of significant drop-out throughout the secondary phase and the substantial number of Gypsies, Roma and Travellers who change their ethnic identification.

ACERT asked for the data on the Gypsy/Roma group (red) to be split into pupils who have English as a home language (royal blue) and those who don’t (light blue). This method was used in the NFER study “Improving Outcomes for Gypsy, Roma and Traveller pupils” and broadly separates established Gypsy communities from more recently arrived Roma groups. 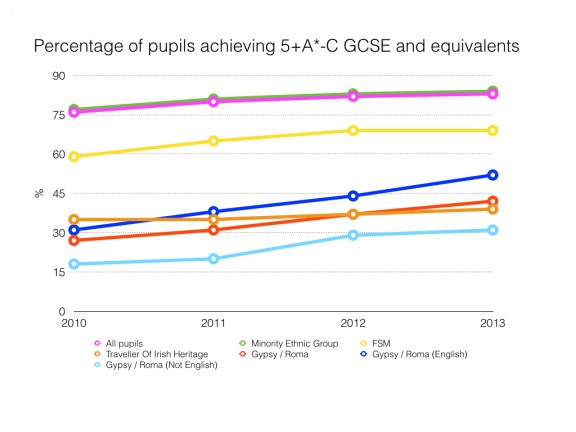 The data also suggests that:

The full data and a presentation are available at https://acert.org.uk/education-data-2012-3/