This month the spotlight is on EC member Tim Everson. 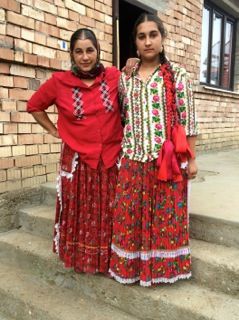 Shouts of applause arose through the smoke filled air as a young boy, no older than seven, launched into another burst of melodic notes on an electronic keyboard as he lead the band, of perhaps the most famous virtuoso Gypsy musicians in the world, who followed the melody on violin, cimbalom, accordion and double bass……. writes EC member Tim Everson.

As the music rose to a crescendo, cries of encouragement were followed by the appreciative audience of Gypsy and gauje on lookers throwing down fifty, one hundred lei notes onto the child’s keyboard!

I was in Romania, in the village of Clejani, home to the Gypsy band Taraf De Haidouks and staying with the family of the accordionist, Todei and his wife. This was the last stop on a trip to Romania living with Roma musicians accompanied by a small group of aficionados of Eastern European Gypsy music.

Our guide, Helmut Neumann is married to Aurelia, daughter of Todei. Helmut was the key to our entry into the Gypsy musicians world.
Living with Romanian Roma had been a long held wish inspired by a book ‘The Gypsies’ by Jean Paul Clebert that I read when I was sixteen. As life turned out, I found myself working with English Gypsies and Travellers for thirty years until eventually, when Romania joined the EU, Romanian Roma came to me!

In the meantime I’d been inspired by Roma bands touring the UK such as the Taraf, Fanfare Ciocarlia, Mahala Rai Banda, Kocani Orkestar and the great Macedonian singer Esma Redzevopa.

Thus, last September, as the sun set on wooded hills, meadows of wild flowers and fields of yellowing corn, I found myself in a mini bus leaving the metalled road for the dirt track which leads into the Moldavian village of Zece Prahini, home of Fanfare Ciocarlia. Fanfare is a brass band ‘discovered’ by Henry Ernst, a friend of Helmut’s from Berlin. While travelling in Moldova in the 90s he was told of a brass band made up of farmers and factory workers, who played at weddings and baptisms. Henry was wowed by the band, sold all his possessions and flew Fanfare to Germany for a series of gigs.

They were a great success. The music journalist, Garth Cartwright, described their music as ‘a full throttle dose of Balkan brass madness that shook speakers and rattled skulls’. Henry and Helmut established Asphalt Tango record label to record and tour them; later adding other Roma bands to their catalogue.

I awoke on the first morning in the house of our hosts, the drummer in the band and his wife Mariana, to the clopping of horses hooves, the rattle of cart wheels, barking dogs and cockerels crowing. A long cry from the blast of funky horns and Oriental dance grooves of Fanfare. The music they play is influenced by the marching bands of invading Turkish armies in which their ancestors played. Walking through the village of traditional cottages washed in bold colours and set in orchards we visited a beautiful Orthodox church and the village primary school, paid for with the proceeds of the bands records and tours.

That evening as the sun set we were entertained by Fanfare under the stars, horns blaring while women in flowing dresses and head scarves danced the hora encouraging the reluctant gaje to join in!

Two days later we crossed the Carpathian mountains via Sighisoara, birthplace of Vlad the Impaler, inspiration for Count Dracula, and after visiting a Kalderash village of metal workers, arrived in Ceucas, home of the Lautari band Szaszcsvas, a string band of violins, viola, double bass and accordion.

A memorable evening was passed drinking tuica, a strong plum brandy, and feasting under grapes vines listening to the rapid hypnotic
melodies of the band famous for their interpretations of Hungarian folk tunes. They are renowned dancers and halfway through the evening the viola player and violinist’s teenage granddaughter entertained us with a virtuosic performance.
We travelled south across the flat Wallachian plain arriving in Clejani in late afternoon, the home of Lautari band, Taraf de Haildouks. Clejani is a village of Roma/ gaje, the children educated side by side in the village primary school. Like Fanfare, the musicians traditionally played at weddings, baptisms and funerals.

The recording band Taraf was created by Belgium music promotor, Stephane Karo who, inspired by a 1988 recording of musicians from the village, visited Clejani and promised to bring them to Belgium. With the fall of the dictator, Ceausescu, and communism they were free to travel and Karo fulfilled his promise. Their first album, Musique des Tziganes de Roumanie, topped the European world music charts and in 2001 the Taraf won the BBC Radio 3 World Music Awards. They toured the world becoming an international sensation.

We drove up Lautari Street, our mini bus surrounded by inquisitive, wide eyed children. On being shown to my room in Todei’s old family house I noticed photos, stuck in the frames of gaudy prints of Biblical scenes. These were of Nicolae Neascu with his toothless grin and battered trilby, the virtuoso violin player and leader of the Taraf who sadly died in 2002. He is famed for attaching a horse hair to his violin to produce strange guttural sounds! What an honour to be sleeping in the house of the great Gypsy violinist, admired by Yehudi Menuhin!

Later, gathered around an outside table with my fellow adventurers and gaje music students, chatting over glasses of tuica, wine and eating plates of polenta, salads, cheeses and pickled cabbage the sounds of rapid riffs from an electronic keyboard, hypnotic beats from a darbuka drum and staccato cries from a singer broke into the dark night from a house across the alley. Curious, we ventured out through the iron gates following the sounds and found ourselves mixing with a crowd of excited young Roma caught up in the rhythms of a manele band playing at full volume. It was party time! A celebration of a Christening and it seemed everyone in the village had gathered.

Manele is the modern music of the younger generation of Roma musicians, a form of rap over Turkish/Arabic beats, electronic and hugely popular in clubs. On my last night in Romania, in Bucharest, I went clubbing with Helmut, Aurelia and friends. Strong drink, loud pumping beats until four in the morning left me flying back to UK with an aching head but cherishing the warmth of my hosts, their music and a dream fulfilled!

PS Sadly, with the passing of Stephan Karo the Taraf no longer tour but check out their 2015 album ‘Of Lovers, Gamblers and Parachute Skirts’
Fanfare Ciocarlia are playing O2 Forum, Kentish Town on Friday 14th April.