The 2016 ACERT conference Identity Now more than achieved its objective of providing an opportunity to reflect on the meaning and importance of Gypsy, Roma and Traveller identities in a range of contexts. Around 50 participants, most from community backgrounds, presented and discussed different aspects of identity and the challenges they experienced asserting and defending it. 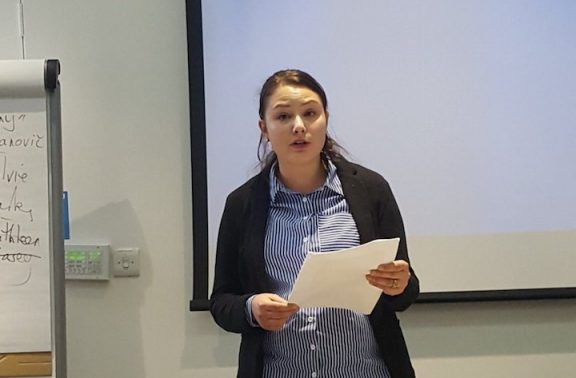 Various ways in which the Traveller community were under attack were described. The demonstration in Westminster against the Housing Bill was presented as expressing Traveller identity, as collective defiance against a hostile act. The Housing Bill proposes to redefine the scope of ‘Traveller’ more narrowly for the purposes of UK Planning Law, with the effect that large numbers of Travellers will be unable to obtain or renew planning permission for mobile accommodation such as caravans. Lisa emphasized the importance of Travellers reclaiming their history, particularly their history of struggle against prejudice and oppressive government.

Lisa also bemoaned the absence of any coherent UK policy of inclusion for Travellers. She argued that government was prone to adopt the ‘cultural deficit model’ to explain the underachievement of Travellers within the educational system. This model blames underachievement on deficiencies in pupils and students themselves, indirectly pinning blame also on their families and general culture. This then justifies a policy of indifference and neglect, swiftly followed by funding cuts and adverse legislation. She suggested that a failure to include Travellers fully has led to widespread disparagement of Travellers as a group. Lisa cited negative media stereotypes, as in the Channel 4 ‘Big Fat Gypsy Wedding’ and the 2005 ‘Stamp on the Camps’ campaign by the Sun newspaper. She worried that media portrayals of Travellers as a group stuck in need and poverty were also unhelpful, as if Travellers were just victims of circumstance.

Lisa concluded by re-emphasizing the importance of Gypsies, Roma and Travellers reclaiming their history, to know their significant contribution to society as a whole and to be proud of their identity or identities.

Tanja Jovanovic on difficulties for Gypsies, Roma and Travellers in Higher Education 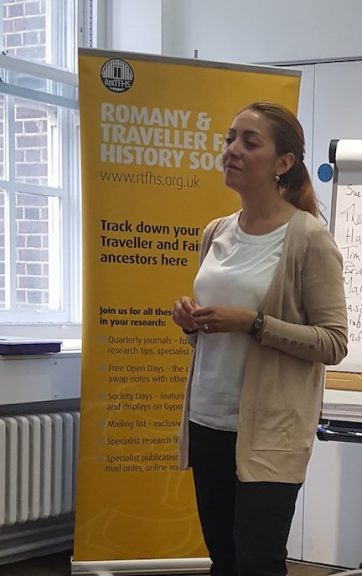 Tanja briefly described the ‘Higher Education Internationalisation and Mobility’ (HEIM) project, which involved universities and other groups across Sweden, Spain and the UK (at the University of Sussex). https://www.sussex.ac.uk/education/cheer/researchprojects/rise

A film was shown about the difficulties students from Gypsy, Roma and Traveller backgrounds face when they reach higher education. Whilst many such students succeed, some could well find the experience problematic. 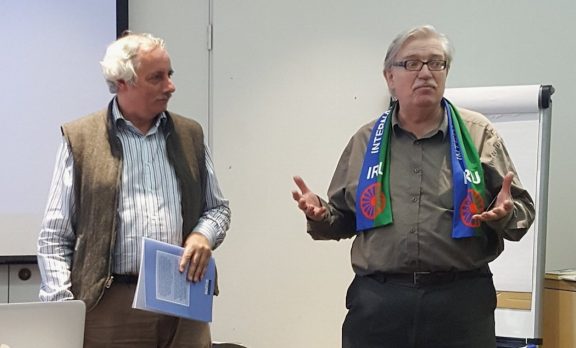 Jeremy discussed the value for Travellers of reconnecting with their family history. Instead of just coming across photographs of anonymous Travellers at various events, the idea was to discover the story of the life and identity of that person. With work, the lives of many individuals could be pieced together to establish a fuller picture. He asserted that through coming to grips with family history we come to learn who we are.

Originally we had hoped that Damian would attend to tell us about a book he has been commissioned to write a book about his responses to visits to old stopping places. We thought it would be relevant to the focus of the day. Unfortunately, as Tim Everson explained, Damian is currently incommunicado in order to meet the publisher’s deadline. In his absence, a video was shown of Damian Le Bas reading his poem “The Greatest Show on the Road” made for Traveller Times.

Hazel Marsh – perceptions of Travellers in music and poetry 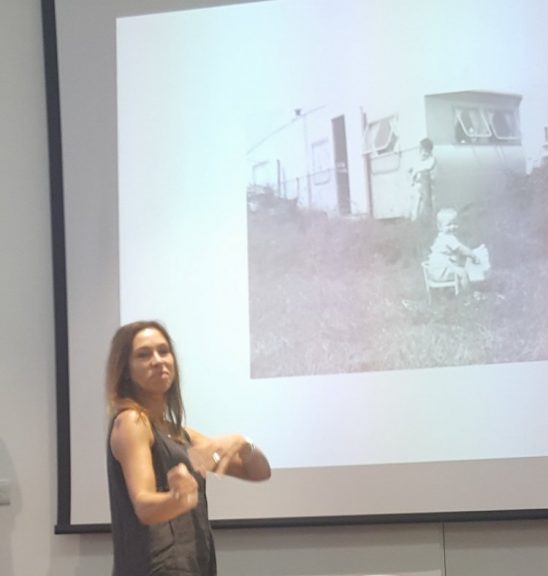 Hazel began with photographs of herself as a child with her parents. She had learned to stay quiet about her Traveller background at school, and so had avoided trouble. Years later her son had innocently revealed his Traveller background in class, and the probably very well-meaning teacher tried to mitigate what she saw as a problem by asserting that she was sure that he was very clean! Ignorance and prejudice is widespread, even when it does not come into the open.

Hazel discussed the depiction of Gypsies, Romanies and Travellers in a variety of media. George Borrow had collected Romany songs and poems from Gypsies, but had thought it necessary in his translations to reconstruct their meaning in tune with his romantic view of Gypsies. As well as showing various posters for films about Gypsies, always as wild free-spirits, she highlighted more modern films such as Latcho Drom and Kusturica’s Time of the Gypsies. Both the latter films seemed obliged to depict Gypsies as musical by birth and liable to burst into a performance at the drop of a hat. Hazel also looked at Gypsy folk singers, and how their mode of delivery was sometimes misunderstood as unmusical. In fact, such folk singers were very deliberate about how they sang, and the audience was treated to a few examples of wonderful songs. Her talk ended with a YouTube performance by Martin Carthy singing a traditional song, Georgie, in the traditional way, his having realized that this was the most appropriate way. Hazel referred the audience to www.veteran.co.uk and www.mustrad.org.uk to discover more about Gypsy and Traveller traditional folk music.

Phoebe Buckley – leaving and coming back 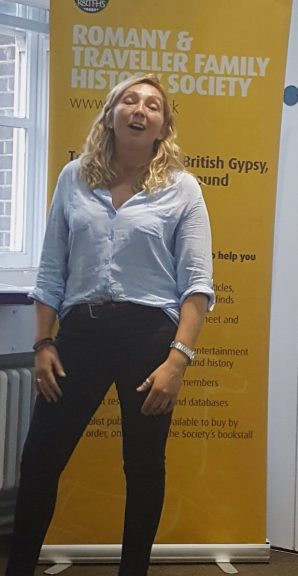 Phoebe Buckley is a successful horse event rider. She related the story of her childhood, of leaving school early and deciding that an imminent marriage was not what she wanted. She left home and began to make her own way, working with horses, and contact with her family diminished sharply. It diminished partly because of she was working away but also because of their unhappiness that she was challenging cultural expectations. She explained how in her new life she was taken at face value by her colleagues and her Traveller identity merged into the background. An unwelcome 2009 item in the Daily Mail depicting her as the ‘pauper’ in a story headlined ‘The Princess & the Pauper’ brought it back. This compared her life competing in riding events with that of Princess Zara Phillips.

More recently she was horrified to learn that her parents were being denied renewal of their planning permission to live in the place they had lived most of their lives. They had had permanent permission on a particular plot, but had asked the local authority if they would get planning permission on a plot on the opposite side of the road if they acquired this plot. The council responded positively but having acquired the new plot they were then able to receive only temporary planning permissions, for short periods such as 12 or 18 months. This uncertain arrangement went on for about 10 years until the Council decided that not even temporary permission would be granted. A long battle ensued, with extraordinary ups and downs. The Council’s reasons for rejection were clearly spurious but they were happy to change these reasons as required. Ultimately, an appeal succeeded this year.

Phoebe asserted strongly that whilst Travellers are clearly subject to both prejudice and unjust treatment, it was up to Travellers to respond positively and assertively. She asserted that she thought that if Travellers simply accept bad treatment then they cannot really blame anybody but themselves. She felt that even if they failed to get the justice and treatment they were due, it was much better to try than simply cave in. 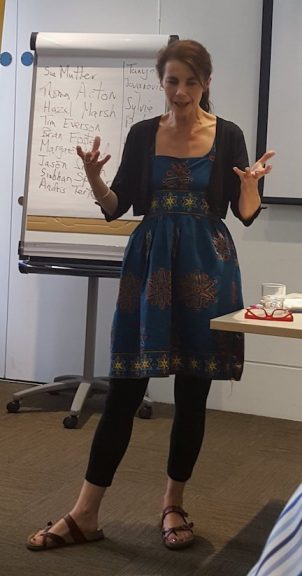 Suzanna King briefly described the play that she had written: Crystal’s Vardo. This is aimed at children, and tells the story of a likeable Gypsy girl, who is bullied at school simply because she is a Gypsy. It tells the story of her going back in time to learn about her identity as a Gypsy, moving from the arrival of Gypsies in England to the present day, taking the drama through many different incidents. The play aimed to present the identity of Gypsies in particular, but Travellers more generally, in a clear and effective way. The leading role is played by an Irish Traveller.

The play has been presented many times over the last five years to audiences in many schools, to classes including both Traveller and non-Traveller children. It has been very helpful in stimulating discussion and also hopefully in creating acceptance of Gypsies and other Travellers. More recently, the play has been successfully shown to adult in UK prisons. https://www.gypsy-traveller.org/crystals-vardo/ 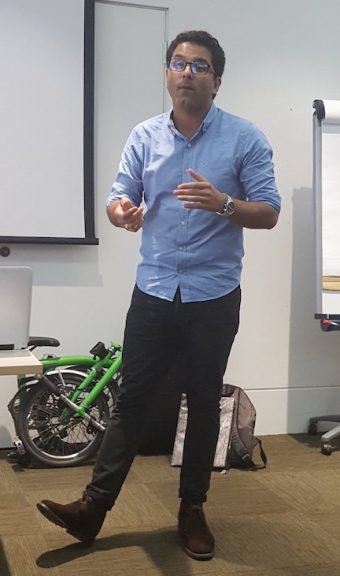 Artur Conka had intended to present a project to create a digital archive of various materials relating to Gypsies, Roma and Travellers, but his colleague was unable to come to the conference. Instead, he showed a trailer for a documentary called Gypsy Gadje that he is making. This film directly concerns the conference theme of identity. The main character is a woman whose parents are mixed, Roma and non-Roma. In consequence, she felt both accepted and rejected by both communities, yet seemed to embrace this double identity.

Valdemar Kalinin and Saeeda Kasym – ‘From Russia with Love’ 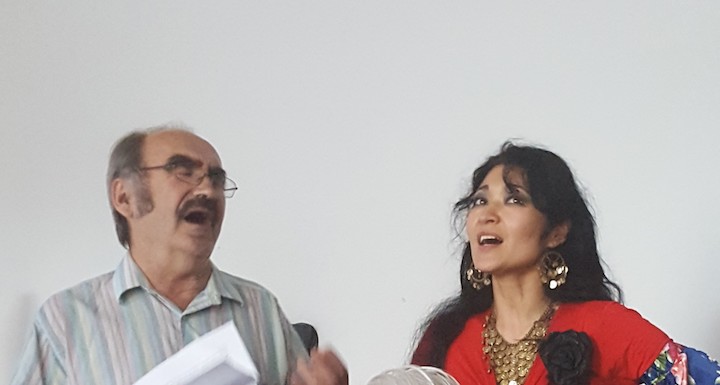 Valdemar introduced an entertainment of prose, poetry, song and dance, that touched on many important themes. Valdemar and the Russian dancer Saeeda both sang, whilst Saeeda performed some examples of Russian Roma dance. https://www.gypsydance.org/

Rose McCarthy, ACERT chair, thanked the participants for a stimulating day and concluded the conference for 2016.